Crayola Discontinues Dandelion colored crayon And Obama's Memoir is Only Half Done! 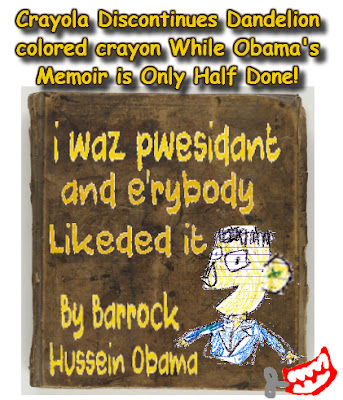 Chattering Teeth News - Two seemingly unrelated stories from last week are apparently bound together after all, this reporter has learned speculated... made up.

First, we learned that former president Barack Obama was in seclusion on the island of Tetiaroa in the South Pacific to begin working on his memoir. The book deal is reportedly for $65Million for two books, one each from Barack and Michelle. Since no government buildings have been blown up on the island, we may assume that obama's former ghostwriter, Bill Ayers, is elsewhere and will not be writing this one.

While 3 books have been published under Barack Obama's moniker, this one will apparently be the first he will actually write. This is a risky move by the former president, as he has leaned heavily on his teleprompter and his ghostwriters for the last 8 years.

Then we read this: Crayola weeds out 'Dandelion' colored crayon

"The announcement came Friday, on National Crayon Day. The color has been a staple of Crayola's 24-pack for the last 27 years."

While you may have ignored this story completely, or simply gave it a "ho hum" and moved along - rest assured that this news sent SHOCKWAVES thru the obama's island compound, golf resort and bath house.

Think about it. If you were obama, what crayon color shows up best when writing on the tanned skin from aborted black baby fetuses? Dandelion yellow, of course! What? You don't really think he would approve of the chopping down of innocent trees to make paper for copies of his books, do you? Might as well use a true replenish able resource in ample supply during his 8 years.

Stay tuned for developments!
Posted by DaBlade at 7:41 AM