T'was the night before Easter, and all thru Quint's Houseboat... 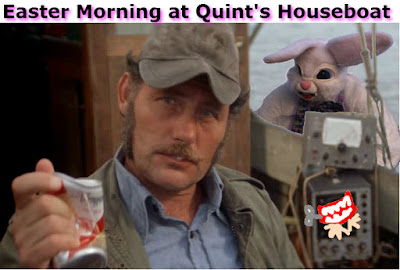 Didn’t see the first bunny until I was five – a tiger – thirteen footer. You know how you know that when the bunny is in your house, Chief? You lay in bed and look toward your darkened closet and see the shadow of floppy ears and the cotton tail. What my brothers and I didn’t know was our Easter mission to stay awake had been so secret, no distress signal to mom or dad had been sent. They didn’t even list us overdue 'til mornin'. Very first light, Chief, bunny come cruisin’. So we formed ourselves into tight groups…the idea was, the bunny comes to the nearest boy and he starts poundin’ and hollerin’ and screamin’. Sometimes the bunny go away. Sometimes he wouldn’t go away. Sometimes that bunny, he looks right into ya, right into your eyes. Y’know, the thing about a bunny, he’s got lifeless eyes, black eyes, like a doll’s eyes. When he comes after ya, he doesn’t seem to be livin’ until he takes your colored eggs, and those black eyes roll over white, and then – aww, then you hear that terrible high-pitch screamin’, the bedsheet turns wet and yellow, and in spite of all the poundin’ and the hollerin’, he come in hippity hoppity and rip ya carrot snacks to pieces…in that first dawn, we lost a dozen eggs. I don’t know how many carrots, maybe a thousand. I don’t know how many eggs. he averaged six an hour… 8am Easter morning, mom called us. She put the coffee on and called us…and when we didn't answer, we heard her coming down the hallway from the kitchen to pick us up. You know, that was the time I was most frightened – waitin’ for my turn. I’ll never wear bunny pajamas again. So, four boys went to bed, four men come out, and the bunny took the boys, Sunday, April the 10th, 1966. Anyway, he delivered the chocolate and hid the eggs. 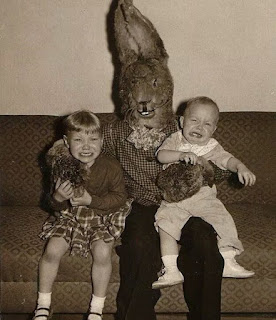 The Easter bunny used to scare the bejesus out of me when I was a kid. Not the dude in the obvious cheap mall costume, but the REAL Easter bunny. You know... Peter Cottontail. Remember the song? 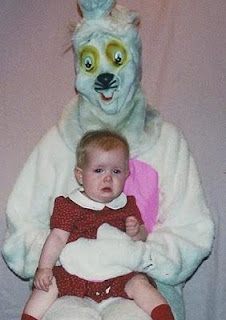 Santa Claus never scared me this way. St. Nick may be an elf, but he always reminded me of a kindly and gentle grandpa who brought me presents and candy once per year. The Easter bunny on the other hand, is this humongous beast covered in fur, with razor sharp teeth, whose sole mission is to HIDE the freakin' eggs I worked my a$$ off coloring! 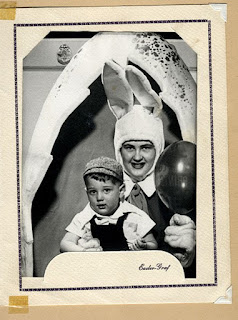 On Christmas eve, all tucked and snug in bed, I would fall asleep with visions of sugar plums dancing in my head. On Easter eve, I would lay awake terrified, straining to hear any sign of the giant rodent with it's rodent brain thinking alien rodent thoughts. Would it stick to the script again this year by hiding the eggs, leaving some candy, and move on? Or would the creature twitch it's nose outside my bedroom door and decide to deviate from the schedule? No? Maybe it was just me then. 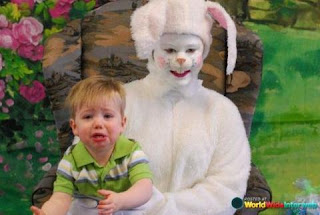 Emo Philips and the Easter Bunny 1983 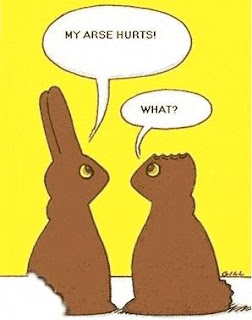