VP Warns NK at DMZ (and other threatening acronyms)

Vice President Pence warns his travel agent, Sean Spicer, that his “era of strategic patience is over.” Spicer was supposed to facilitate the VP's travel to the DMZ - the Demilitarized Zone on the Korean peninsula that splits North Korea from South Korea in order to show U.S. support for South Korea and to send a message to the regime to the north.

He eventually got to the Korean DMZ, but not before Spicer mistakenly chauffeured Pence to the TMZ office in Los Angeles (where the administration has learned that Jennifer Garner and Ben Affleck are moving on), then to the Department of Motor Vehicles in LA (where Spicer renewed his moped registration). 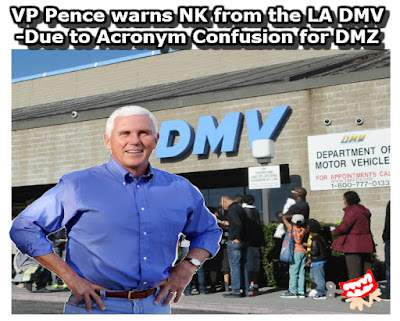 I have always been fascinated by the DMZ (and also fascinated by Sean Spicer's ability to feed and clothe himself). These NK soldiers are always peeking in the windows at the border shack.  They should just have someone there constantly eating a cheeseburger just to taunt them.

Could we do something similar here? Isolate the clown liberals on one side of a border? How long before they wouldn't have electricity or indoor plumbing? 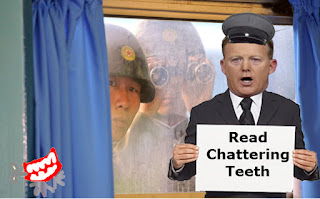