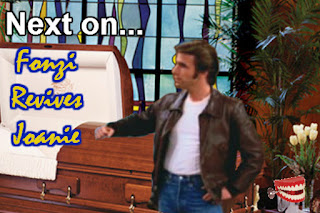 Chattering Teeth News - According to the funeral home janitor named Potsie, a man entered the facility after hours wearing jeans and a white T-shirt under a leather jacket. He strutted up to Erin Moran's casket and uttering something like, "Ayyyyye..."

"He was crackling with power and outlined in a glowing light blue, like he was badly photo shopped by someone in a hurry to get to work," said Potsie. "He hits the side of the casket once with his fist, the lid pops open and out walks Joanie."

The only other information the janitor could provide was that she jumped on the back of the dudes motorcycle, and off they went. Later reports flooded the station that the two were spotted water skiing in the shark tank at the local zoo.

And now, Weezer performs at Arnold's. Got to see Weezer live about a decade ago as a chaperone for one of my boys and a car load of teenagers. Weezer opened for Foo Fighters. Weezer was fantastic. I couldn't stand the noise the other band was making, so I waited in the concourse while the headline played. The kids like it, though.