Yesterday, Dec. 7, 1941 - a date which will live in infamy - the United States of America was suddenly and deliberately attacked by naval and air forces of the Empire of Japan... Hostilities exist. There is no blinking at the fact that our people, our territory and our interests are in grave danger. With confidence in our armed forces - with the unbounding determination of our people - we will gain the inevitable triumph - so help us God. I ask that the Congress declare that since the unprovoked and dastardly attack by Japan on Sunday, Dec. 7, a state of war has existed between the United States and the Japanese empire.

If Barack Obama had been president: 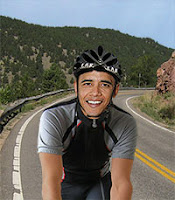 "I'd like to address congress regarding Japan's attack, really I would. Maybe I will December 9th... or 10th. Infamy smimfany! As president, "I need to deal with more than one thing at once.”

"As I said before, I think that one of the things we have to determine is how we can be most helpful. It’s my sense that the most helpful thing we can do right now is, uhhhhhhhhh, to let everyone know this is a sufficiently important problem. I can be helpful, and I am prepared to be anywhere, anytime. So, uh, I think the message is, if I can be helpful, I am prepared to be there at any point."

Dramatic Don Pardo announcer voice - "This has been a Key Moment in alternate history - Part 1!"
Posted by DaBlade at 7:11 AM