In the economy...
Gold prices post biggest 1-day gain ever
due to fear of more credit market turmoil.

Who knew that Mr. T was such a wise investor? 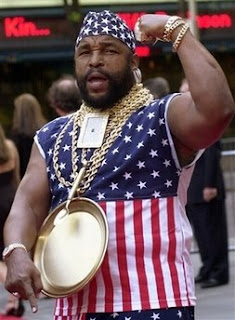 With all the turmoil in the markets, I was worried about my 401K. So I checked. Whew. My outstanding 401K loan balances have not shrunk. Thank goodness.

Sarah Palin's email account hacked! Her super secret moose stew recipes now on Ebay! OK, I have no idea what "shocking" revelations these stolen emails contain, but I'm willing to bet not much. Still, all I can say to this is "That's not change, that's more of the same".

Is race a factor in the presidential race?

Kansas Gov. Kathleen Sebelius says “Have any of you noticed that Barack Obama is part African-American? That may be a factor. All the code language, all that doesn’t show up in the polls. And that may be a factor for some people.”

And Ferraro is a liberal feminist, but was hung out to dry for this. The party line they want to create (even then) is, if you are white and don't vote for Obama, then obviously you are a racist.

How many white liberals have Obama bumper stickers on their cars because it makes them feel good about themselves and assuages their manufactured guilt? Way more than the number of racist rednecks who won't vote for him because he's black.
Posted by DaBlade at 5:20 AM