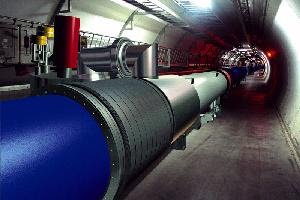 By guest blogger (and brother), Glacial Greg:
As you know, scientists started up a huge particle-smashing machine on Wednesday called the LHC (Large Hadron Collider), in an attempt to re-create the "Big Bang" that is said to have created the universe. A 17 mile circular tunnel buried under France is the largest and most complex machine ever made for what experts say is the largest scientific experiment in history.

The experiment began with a particle beam the size of a human hair appearing in the tunnel, prompting the project leader to exclaim "We've got a beam!" Several hundred physicists and technicians in the control room burst into applause at the news and later again celebrated loudly when the beam completed a journey in one direction “Fantastic!" Sentiments we can relate to having been part of childhood experiments with magnifying glasses and bugs.

Some “doomsdayers” have fanned fears that the experiments could create black holes, which experts dismiss as unfounded. I for one hope not… after all, it IS beneath France Oui? That loud, sucking sound you hear is simply the latest massive retreat of the French!

So the "World did not end." I wonder how long before Nancy Pelosi and company claim credit as part of her "I'm trying to save the planet!" strategy?


[DaBlade response] Hey bro, I like the magnifying glass analogy, but actually this particle accelerator thingy makes me think of the time in our childhood when we lit an M-100 and placed it in a neighbor's brand new shiny aluminum garbage can just to see what would happen. Dyn-o-mite! Of course, the explosion was bigger than our young skulls could have imagined, sending shock waves down Lockhead street and rattling the windows on Dell Street. I still can remember the can's lid launching into the sky, spinning like a silver alien saucer, getting smaller and smaller. In the middle of the street sat the remnants of the base, with the can's sides split and peeled back like a banana. I'm glad our hearing eventually came back.

Maybe instead of crashing light beams at each other at high velocity, these scientists should launch M-100's at each other. Just sayin' from experience.

Beam me up Scotty!