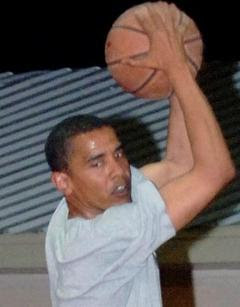 Obama stopped by Flint town again yesterday to trash talk John McCain and to work on his baseline jumper. Flint has a proud B-ball tradition and Barack is hoping to reinvigorate his slumping campaign with our nice soft rims.

"You don't need to tell people in Flint and our country that the economy is in bad shape," said Obama.

"But you do need to tell John McCain."

Obama touched on Flint's high unemployment and housing crisis, all the while criticizing McCain's recent claims that the Republican ticket is for change. "Government can't be for change when you brag about supporting George Bush," said Obama.

And as we all know, George Bush and the Republicans have been in charge of Detroit, Flint, and all of Michigan for years now. Governor Granholm? Never heard of her. Levin? Kwame? The Don? Who? We want more urban socialism!

Most of the audience members appeared to be Obama supporters, despite the fact the event was touted as a speech for undecided voters, as well as campaign volunteers and community leaders.

Many of the attendees were wearing union gear.

Soft rims indeed.
Posted by DaBlade at 7:12 AM