My advice on the economy with my new Sarah Palin doll 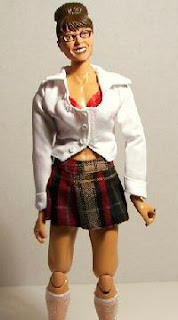 Governor Sarah Palin has Senator John McCain's ear, and I believe I have hers (at least on a subconscious level, channeling my thoughts and advice to her through my new Sarah Palin doll).

Me: "To bail out, or not to bail out. That is the question. Tell McCain to just say no. A trillion dollars in lipstick won't turn this Wall Street pig into a princess, it will just be an additional trillion dollar expense for the taxpayers and a power grab by the left. Let the losers fail. A free market economy left alone is a process of creative destruction. Poor decisions should not be rewarded now. Drill another hole in the leather belt (DRILL HERE, DRILL NOW), cinch it up and let's do this. Tear down this Wall! The American spirit will prevail in short order, if left unhindered by the government. Now what do you have to say Sarah?"

Me: "You won't talk to me? It's the 'other doll', right? Anybody want a slightly used S&M Barbie?"

Today's telepathic poll results: 98.7% of the low income home mortgage holders who took advantage of the loose and non-existant income and credit requirements (thanks Barney Frank and Chris Dodd) to finance their home and now can't pay for it, say Bush is to blame by exerting mind control and forcing them to sign the mortgage papers.

Down one road is a bureaucratic, insider-dominated system of litigation, regulation, and taxation with government dominance, with slow growth, expensive and scarce energy, and the eventual replacement of the United States by China and India as the world's most advanced and prosperous nations.

Down the other road is a dynamic American economy producing its own energy, independent of dictators, using science and technology to create an exciting future, and continuing its role as the most prosperous and technologically advanced country in the world.

Has Obama made a decision yet, or has he not yet been able to calculate which way the political winds are blowing?
Posted by DaBlade at 7:19 AM