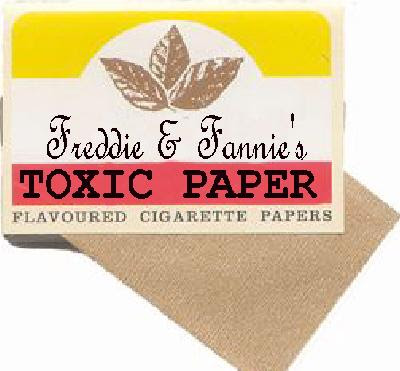 Random brilliance:
How is it that this "crisis" just happened to come to a head on the cusp of the election? I am always just a little suspicious of coincidence. Even if this were a real crisis, that is no time to throw out your belief system for convenience sake. You can't be pro-life but change your position because you become pregnant.

Nancy Pelosi is nothing more than a counter-culture hippie congresswoman from the left coast republic of Californiastan. Nobody should be surprised to hear a duck quack. Or a "quack" try to duck responsibility. "What happened today cannot stand," she blathered.

Hey Nancy, you're the Speaker of the majority party! You don't need Republicans to pass this albatross. Of course, then you couldn't deflect and transfer blame for this fiasco to what you call "failed Bush economic policies". Blame that belongs entirely to your party, "gentlewoman" (sic), and YOU know it!

"NOW IS NOT THE TIME TO FIX BLAME!"
Just kidding. Yes it is.
Republicans, McCain included, pushed for regulations on Fannie Mae and Freddie Mac back in 2004 that would have averted this disaster.

Maxine Waters: "we do not have a crisis at Freddie Mac, and particularly at Fannie Mae, under the outstanding leadership of Mr. Frank Raines."
Barney Frank (then): "I don't see anything in your report that raises safety and soundness problems (of Fannie and Freddie)."

Barney Frank (now): "Give me those 12 people's names (Republican "no" votes who had presumably turned) and I will go talk uncharacteristically nicely to them and tell them what wonderful people they are and maybe they'll now think about the country." Maybe I will tell them about how much "I love rhinestones and Barbara Streisand."

OK, the last sentence is actually a Richard Simmons quote. The point is, Frank is a partisan hack. Hey Barn, mop up your own mess.

RUSH LIMBAUGH: You know what the Democrats have engaged in here, partisan attacks, they're out there saying the Republicans caused this. Nancy Pelosi, "The Republicans caused this." And then they say they need the Republican votes. They go out and make these partisan attacks and then they make these bipartisan demands. And it's the exact opposite. There is no doubt at whose feet to lay blame here, the Democrats.
Posted by DaBlade at 6:56 AM