Hillary shills for Obama in Flint 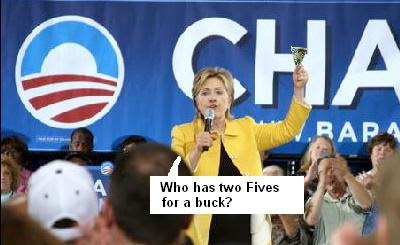 Jared Field is a very talented, young FJ reporter who was given the assignment to cover Hillary's visit to our area Saturday. I'm guessing that he wore a homemade aluminum foil pointy hat, hoping to deflect the ignorance permeating the auditorium this night. His story (Senator Hillary Clinton beats economic drum on stump for Obama at rally for change) begins with the old Clintonista slogan, "It's (still) the economy, stupid". The word "stupid" in this sentence apparently describes many of the attendees understanding of basic economics.

Take this unfortunate quote from a 61-year-old Flint Township gentleman: "Hillary did what she's so good at; she talked about this area and how it has been impacted. I don't know how anyone could even think about going with McCain when they live in this community. She reminded people that (the economy) is what it's all about."

With all due respect, sir, but are you the unfortunate gentleman who could not find his way out from the corn patch this past weekend? You've all no doubt heard Albert Einstein's popular definition of insanity as "doing the same thing over and over again and expecting different results”. I wouldn't be surprised if a dictionary somewhere included a picture of "us" (pick your preference for definition of "us": Flint, Detroit, Michigan, Michael Moore) next to the definition of insanity.

"Clinton, in a speech almost solely dedicated to the economy, said that Michigan, because of its worst-in-the-nation economy, has the greatest stake in a Democratic presidency."

I couldn't agree more, but I'm sure she meant it to be interpreted as "Bush bad", and that somehow Bush and the Republicans are responsible for the economic devastation that is Michigan. Forget the fact that wrongheaded liberal democrat policies have ruined our inner-cities, and conveniently put aside for a moment that our public school system is a national joke. By all means, let's continue to beat our collective "democrat voting," "union loving," and "business chasing" heads against the wall. Maybe we will get a different result. Ya think?

"When her husband was president, I had a jingle in my pocket that hasn't been there since," continued the 61-year-old "brainiac".

Apparently all you have now is a rattle between your ears. Again, the "due respect" thingy (whatever), how is it that Bill Clinton's daily dalliances with a chunky intern in the 90's was responsible for putting a "jingle in your pocket"? Nevermind. Don't answer that, I'll tell you. It was Ronald Reagan's tax cuts and the resulting economic expansion, as well as the Newt Gingrich led Republican House takeover in 1994 that led to your "jingle" sir.

If you are going to vote this November, I believe it is your duty to self-educate beyond your current thin, unthinking, emotion-driven rationale. That goes for all of my fellow Genesee Countians.

Until then, you'll never have the wherewithal to make it out of the corn fields unassisted. In the meantime, maybe we can turn the b.s. from her visit into something useful.
Posted by DaBlade at 8:10 AM