It sure is different from the brochure. 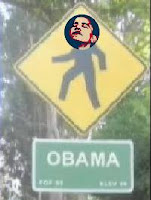 OLEMA (AP) ― Motorists entering the quaint, woodsy town of Olema near the sea in Marin County may notice a subtle change as they enter: it appears the burg's name has been changed to 'Obama.' Democratic presidential candidate Barack Obama supporter and bed and breakfast owner Kelly Emery created a perfect mirror of the green sign people read as they enter the town's limits.'

Wow. Obamaville. Messiahland. TheOne's Town. What would it be like to live there? We have an election in November and we just may find out. This story reminded me of something else...

Tonight's story on The Twilight Zone...
One of my all-time favorite 'Zones is episode 73 from the year of my birth, 1961, titled "It's a Good Life" (yes, I googled. I'm not THAT much of a 'zoner). Billy Mumy, Will Robinson from Lost in Space fame, stars in this one, "as a bored little monster who is terrorizing an entire town. It seems this kid is a freak who has amazing mental powers but lacks the moral development to use it wisely."

"He knows your every thought, can feel your every emotion. He can eliminate all you hold dear. Who is he?"

Plot synopsis from Wiki (kinda. I only CHANGED a little):

Forty-Six-year-old Anthony Fremont Barack Obama looks like any other little boy, liberal democrat but looks are deceiving. He is a monster, a mutant with godlike mental powers.(at least according to his followers) Early on, he isolated the small hamlet of Peaksville, Ohio.Obama, California. In fact, the handful of inhabitants do not even know if he destroyed the rest of the world or if it still exists with his butchering foreign policy of appeasement and surrender and lack of concise decision-making ability . Anthony The Barack has also eliminated electricity, automobiles, and television signals (sounds about right). He controls the weather (unlike Bush, who single-handedly caused Hurricane Katrina) and what supplies can be found in the grocery store. Anthony The Barack creates and destroys as he pleases, and controls when the residents can watch the TV and what they can watch on it. The adults The media tiptoe nervously around him, constantly telling him how everything he does is "good", since displeasing him can get them wished away "to the cornfield" "Fox News", where they are presumably met by a less-than-happy ending...

If Obama wins the election, make sure to think only good thoughts and repeat "That's a real good thing what Barry did!"

"It's good that I have to wait in this healthcare line for 2 1/2 years for my necessary emergency surgery."

"It's good that Barry has left that nasty oil in the ground and has installed worthless windmills in my backyard, and it's good that further regulations and government controls have completely destroyed the economy."