More proof of moon landing than of Obama's birth place

Some things I have always just taken on faith because I don't have the time for an exhaustive 30-second Google search. Like the moon landing 40 years ago. I have vivid memories of my father rousting me from my slumber in order to watch the grainy moonlanding footage. I don't remember exactly what he said to me in answer to my 8-year-old protestations, but it had something to do with "history in the making," and "you will always remember this." Whatever he said to me, it was enough to induce the necessary chemical reactions in my brain to commit this event to my longterm memory, and for that I am thankful.

Then I stumbled upon this.
Was The Apollo Moon Landing Fake?

This, coupled with the convenient loss of the original high-quality tapes, staggered my once solid belief in the legitimacy of the moon landing. Have we been duped? Did Apollo land on some Hollywood backlot?

Like that the Apollo moon landing was faked.
Or that we have to spend more to avoid bankruptcy.
Or Obama promising he won’t sign any health-care bill that adds to the deficit.

I'd believe THIs before that...

BIGFOOT on the moon? 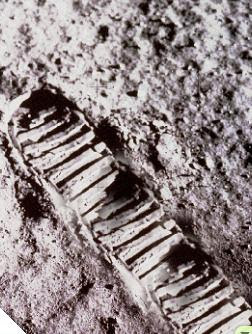