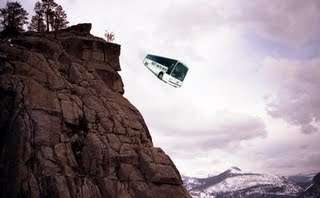 Sure, Obama is driving this bus, but he can't be held accountable! This is more a referendum on the state of the road and the tire inflation than on Obama's driving skills.

Not surprisingly, the HuffingGluePost (along with the rest of the left wing blogosphere) is really going out of it's way to hold Obama blameless in the election day Democrat massacre. Arianna's huge block headlines scream:
"IT'S THE ECONOMY (NOT OBAMA), STUPID".

Here are some other headlines on this same topic that caught my eye...

ABC
ABC: Exit Polls Show Voters Approve Of Obama, Wary Of Economy... Majority Of Voters Say Obama Not A Factor In Vote.
Vast economic discontent marked the mood of Tuesday's off-year voters, portending potential trouble for incumbents generally and Democrats in particular in 2010. Still the gubernatorial elections in Virginia and New Jersey looked less like a referendum on Barack Obama than a reflection of their own candidates and issues.

CBS
Exit Polls in Va. and N.J.: The Obama (Non) Factor?
And what about the Obama factor? President Obama campaigned for both the Democratic gubernatorial candidates, even visiting New Jersey as recently as Sunday to stump for Jon Corzine. Still, majorities of voters in both states (56 percent in Virginia and 60 percent in New Jersey) said President Obama was not a factor in their vote today.

CNN
Analysis: Elections not a referendum on Obama
Neither Democratic candidate was Obama; neither was a great spokesman for "change;" and Democratic strategists and grassroots activists said each candidate failed to give independents a reason to support them.

FOX
Republican Victories a Referendum On Obama?
Just take the poll. It's as relevant as all that other bs.

Frankly, I don't care what the headlines or the left wing spin doctors say the day after this tsunami of discontent washes all the liberal bums out of the House in 2010.
Posted by DaBlade at 7:30 AM