Obama to China - "Tear Down This Wall!"

Seriously. I thought my lineage was complicated (right uncle-cousin?). But then came our POTUS with the MOSTUS, Barack Hassan OBowma. He steps off the plane in China and is hugging and bowing like an idiot to another half-brother, this one Mark Okoth Obama Ndesandjo (MOON).

Talk about a shack-living half-brother in every port! If I got this straight, Ndesandjo's mother, Ruth Nidesand, was Barack Obama Sr.'s third wife, thrice removed. Dreams of My Father, indeed! Doesn't sound like either mom or dad were getting much sleep in the day.

Obama then had Michelle strap on his helmet for his tour of the Great Wall of China. 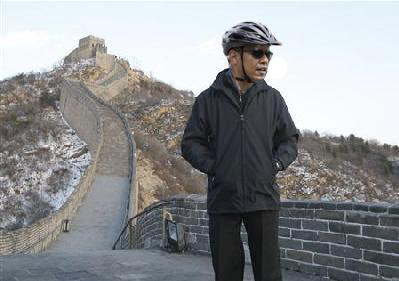 Obama met with Chinese Premier Wen Jiabao on the Wall, and our Chattering Teeth reporter was there...

WEN: The Great Wall is a proud symbol of their heritage for the Chinese people.

OBAMA: Well I must admit that this wall thingy does work. I haven't spotted even ONE Mexican inside your borders since I've arrived. Oops, Hu asked me not to talk about Yuan, know what I'm sayin'?!

WEN: Errrr.... not really. Let me just say that China does not pursue a trade surplus, and my government wants to encourage a steady balancing of bilateral trade.

WEN: Mr. President, please come down from there!

WEN: I do not know understand this question...?!

OBAMA: Cuz' according to NASA, you can see this sucker from outer space (smiles and points to Michelle's big 'ol butt) Know what I'm sayin'?

WEN: May we get back to business please?!


The official Xinhua news agency stated that Obama's words "forged a good starting point to further Chinese-U.S. ties."
Posted by DaBlade at 7:20 AM