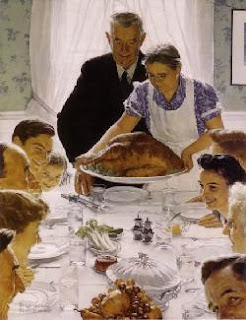 I recall fondly the Thanksgivings of my youth. The day would start early, as I had to do the paper route. I would distribute the five pound editions four at a time before having to go home to re-load the sack. Once the papers were done, it was back home to the smell of roasting turkey! My father was a homicide detective, and the high Flint crime rate kept him gamefully employed and food on the table.

There was nothing on the three TV channels except parades, so I would lay on the green shag carpet in front of the 19in screen and watch those. At some point the house smoke alarm would go off, acting as a sort of dinner bell by announcing that mom's rolls were done (and then some) and it was time to eat.

My brothers and I would rush the table and throw our asses and elbows out like we were posting up Shaq for a rebound. My dad would tell us, "take what you want, but eat what you take." Now I have 3 boys of my own. It brings me great joy to see them carry on that tradition.

Happy Thanksgiving to one and all of my friends!
Posted by DaBlade at 10:46 AM