Yzerman inducted into the Hockey Hall of Fame

The Greatest Leader In All Of Sports 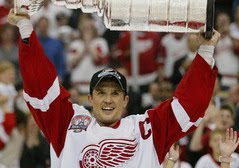 Steve Yzerman, retired Detroit Red Wing superstar and gentleman, was inducted in the Hockey Hall of Fame yesterday. He was the Red Wing captain for 20 of his 22-year career, the longest tenured captain in North American sports history.

Toronto --Steve Yzerman stood in the middle of a large circle of media Monday...

"There is such a fine line between winning and losing," Yzerman said. "I came into the league in 1983 and retired in 2006. You win three Cups and you say, 'Wow, it was a successful career.' But the 19 other years weren't so successful.

Those 3 Cups hold many terrific memories, but the other 19 of Yzerman's Wing seasons were also special for me. I had a lot of fun going to games at the Joe or watching the games on TV. I remember being at the game when "Silk" was hit in the face by a slapshot, and I remember watching him lift the first cup while watching on TV at Bubbas.

I remember my 7-year-old son sitting on my lap during a Wings game, when he asked me if maybe he could play hockey. "Sure," said I, having no idea what I was getting myself into (11 years and approximately $50K later). So in a way, I would be driving a much nicer car were it not for Mr. Yzerman!

Truth is, I wouldn't trade these memories for anything.
Posted by DaBlade at 8:02 AM