Scozzafava scan error should cost her $5 per voter 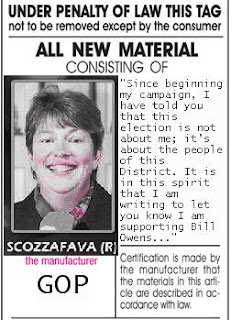 per wiki "Laws requiring these tags were passed in the United States to inform consumers as to whether the stuffed article they were buying contained new or recycled materials. This was and still is considered important as contaminated, recycled stuffing material could contain lice, bedbugs, or human excretions."

The consumers have spoken and have found this mattress to be full of excrement.

I believe it was Billy Shakespeare who said: A rose by any other name would smell as sweet.

The same can be said of a turd.

The "GOP manufacturers" better wise up and understand the consumers are demanding quality out of their products. I have no desire to sleep on a "Democrat Light" mattress, advertised to be 50% lice free.

Hot Air linked to Newt's Doug Hoffman endorsement by pointing out that the commenters were tearing him a new one over his original Scozzafava support.

I must say, some of these comments are brutal, but right on point. I hope we are way past the time when we conservatives would willingly "hold our nose" at the ballot box and accept the lesser of two liberals. Those were pre-Obama times, when the democrats were content with a slow and methodical incrementalism of liberal big government and the resulting cultural rot. Obama threw that fetus out with the bathwater and is in a full throttle in-your-face socialist takeover mode.

Unlike most of these commenters, I am willing to forgive Newt's error in judgement, so long as he responds with a mea culpa and disowns this "Republicans must become moderate so the have a big lice-infested tent" mantra. I have every confidence that Newt will take this rightful lashing and learn these lessons. At least I feel he has earned the benefit of doubt here.

So in conclusion, the "R" label is still our best vehicle to stop this madness that Obama is facilitating. The "R" in Republican needs to stand for "Reagan" conservatism once again, or tea partiers have shown they are more than happy to look elsewhere. 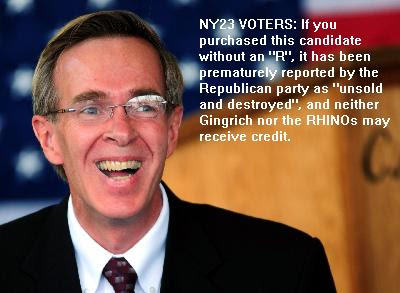