In a violent city where murder is the norm, basketball is the only truth. Omar McGee gathers testimony from the street in an attempt to make sense of the world he himself struggled against as a child. McGee chronicles the rich legacy of great ball players that have come out of Flint, Michigan, against the gridlock of poverty, drugs and crime that General Motors left behind.

100,000 population
60,000 Jobs Lost To General Motors
Leads The Nation In Murders Per Capita
Money Magazine Listed The Worst Place To Live In America

cue rap music in opening trailor... or better yet a period piece circa 1975, from Flint's very own Grand Funk Railroad.

From the other side of the Flint river, over on the south side of town, kids growing up in the blue-collar neighborhoods had it tough too... sort of.

Shep: I assume this is another film about growing up in the poverty-striken town of Flint, Michigan, and suffering all of the hardships and crime on Flint’s rough streets?

DaBlade: This film tells it's story from my perspective and through my eyes growing up in Flint. Looking back at my childhood I realize that we weren't rich by any means, but we had a roof over our heads and food on the table. My dad was a Homicide Detective for the Flint Police Department, so while he may not have been pulling GM wages, he certainly had steady work.

Shep: Your comment of "steady work" for your father alludes to the infamous mean streets of Flint and the top ranking for murders per capita. Did you grow up flinching at every firecracker or car back-firing, worried that a bullet was coming for you?

DaBlade: My side of town was completely safe by comparison to McGee's depiction of the north side. In fact, the only drive-bys I dreaded in my neighborhood was the daily delivery truck bringing the newspaper bundles for my paper route. The only "crack" I had to worry about was the kind found on the sidewalks.

Shep: McGee's film, Flintown Kids, makes the case that there are only two ways out of Flint for kids seeking a better life - The drug trade or basketball. Yes?

DaBlade: Uhhh... In the 70's, my two main career options involved a decision as to whether I would be happy pushing a button on an assembly line for 40-60 hours per week, or going to school. While GM jobs are now gone, the school option exists even today. As far as I know, there have always been schools on both sides of the river, so I'm not buying this "drugs or basketball" premise.

Shep: But Flint is known for producing great basketball talent, yet you left that off your list of options.

DaBlade: Oh make no mistake Shep, my brothers and I could 'ball... 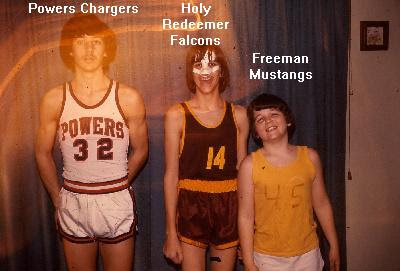 But inexplicably, no scholarships came our way (not even to oldest brother Snap, who played for the So'western Colts and is missing from the photo). Oh, and don't ask about my face cast. Just know that I lead with my nose. And apparently I was so tough that I used black electrical tape for cuts on the thigh (Jack Bauer, eat your heart out). It's how I roll. 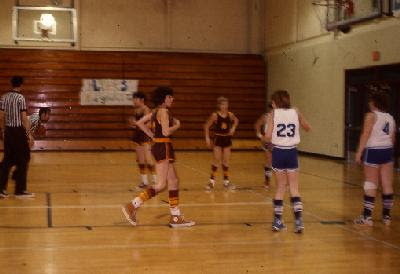 ...especially when Holy Redeemer played those punks from Redeemer Lutheran. Notice the young stud (yours truly) hustling in to line up for a teammate's foul shot. If memory serves, this was my first "shift" of the game with 23 seconds left and a 15 point lead. The coach's expert strategy of saving me until the end worked like a charm, as my fresh legs carried the team to victory.

Anyway, don't worry about bookmarking this people, as it will all be in the movie. At least it will once I secure some financing.
Posted by DaBlade at 3:15 PM