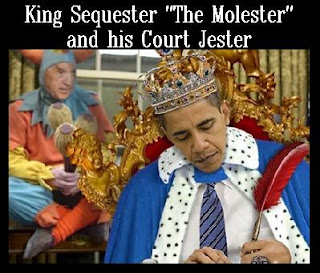 King Sequester "The Molester"
Bides his time with Biden his Jester
Roads and bridges, their main investor
Neither one sports any chest hair
Gutting the Military and blame John Boehner


The Pentagon warned 800,000 civilian employees worldwide Wednesday that they will be forced to take unpaid leave if deep budget cuts take effect next week, fueling growing anxiety about the impact of the automatic spending reductions on the nation’s economy and security.

“There is no mistaking that the rigid nature of the cuts forced upon this department, and their scale, will result in a serious erosion of readiness across the force,” Secretary of Defense Leon E. Panetta said to employees in a memo issued Wednesday.

DaBlade's 30 second commentary:
The sequester was obama's deal, so the serious national security erosion Panetta warns about is not only obama's fault, it has been his goal all along. The far radical left hates the military, so gutting their budget is his master plan to wither it on the vine. The 800,000 furloughs (with more promised) was not the result of the mean old republicans refusal to compromise, it is a direct order from obama.

Finger in the Mail
In the event of a kidnapping or Hostage Situation where characters are held for ransom, when the kidnapper is ready to make his demands known and/or make sure he is taken seriously by his hostage's loved ones or law enforcement authorities, the kidnapper will send severed extremities from his hostage to the family/police. Fingers are very common, but ears, teeth, toes, hair, etc. are frequently fair game, as well.

Only in this movie, the severed finger (furloughs) is completely the fault of the parents (GOP) by their failure to "compromise" to the kidnapper's (obama) demands.
Posted by DaBlade at 7:53 AM