CAPTION THIS, on Double Entendre Saturday

DOUBLE - means "two", or "a pair", and
ENTENDRE - is French, meaning "mammary bullets"

OK, just kidding. A Double entendre has nothing to do with Katy Perry’s boobs, rather it is "a word or expression capable of two interpretations with one usually risqué." (per Merriam-Webster)

With today's blog lesson plan taken care of, it's time for recess, as we play:
CAPTION THIS PHOTO. 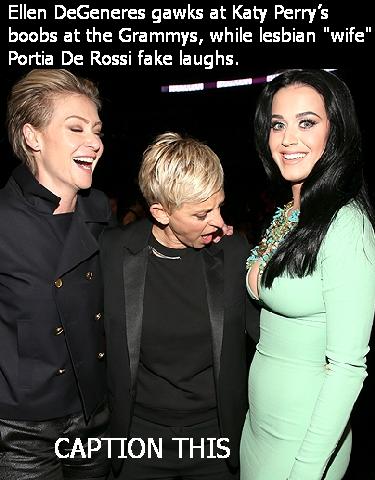 Picture is courtesy of the National Enquirer, (where I like to go for my hard news)
According to the article, Ellen and Porta De Potty (whatever her name is) wed in 2008 but, sources say they’ve hit a few rough patches as Ellen devotes more and more time to her soaring career.

Maybe it's just me, but the last thing I want to hear about are a couple of middle-aged lesbian's rough patches. By the way, Ellen and Porta De Potty remind me of a couple of penguins by the way they're dressed in the photo.

I imagine Ellen telling one of her famous jokes to Katy's boobs:
“I have just learned that penguins are monogamous for life, which doesn’t really surprise me all that much because they all look exactly alike.  It’s not like they’re going to meet a better looking penguin someday.”

By the way Katy, I'm not really a penguin, even though she makes us dress like this. Penguins are actually a group of aquatic, flightless birds living almost exclusively in the southern hemisphere. Speaking of your "southern hemisphere", you wanna dance?