Sure, there continues to be skyrocketing Unemployment and economic collapse, but... 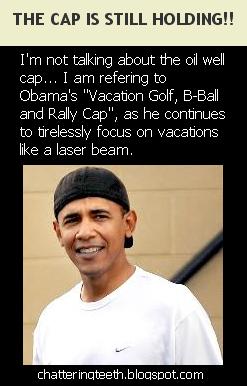 TODAY'S TOP STORY
Press Waits on 'Party Bus' as President Golfs Today
The president, down in Florida for vacation without his family, will spend the day golfing. The press, meanwhile, is on a "party bus," according to the pool report.

Isn't that special? Our magnificent king takes another golf vacation on our dime, lighting cigars with newly printed $100's and passing out freshly minted $Trillion Dollar Platinum ball markers to his buddies on the greens - with his lapdog press reporters drinking and fornicating on his psychedelic Partridge Family "party bus" while they wait to granted an audience and gifted with his presence. Meanwhile, the 99% continues to suffer.

Wouldn't it be fitting if obama stopped by and climbed aboard the "party bus" for a daily dose of press adoration, only to have a small fire catch hold in the bus engine - thereby crippling power to the bus doors and locking them in - only to have a freak wave wash the bus out to sea in the Gulf of Mexico, where it floats for days without climate controls or a working bathroom in the back - and obama's vacation is spent ankle deep in his and the reporter's feces? Wouldn't that be a Triumph?

Yes, my sentences (and font size) tend to run-on-ith when my imagination gets carried away.

Oh, and included in his taxpayer paid expenses are golf lessons for $1000/hour.

Isn't it great to see that the bumbling and incompetent community organizer is willing to bring in professional help for SOMETHING, even if it is just for his deficiencies in golf? If he tried his same strategy on the course as he does with the economy and foreign policy, all 18 holes would be so trashed that nobody could play on them for generations.
Posted by DaBlade at 7:51 AM