Is Bigfoot living in Michigan and eating our pizza?

There are two things in this world that I know for sure. There is a Bigfoot, and I am not he... AND I like pizza, so I guess that's three.

According to reports, this wooded property actually has broken branches from TREES in secluded areas on the property and piles of animal carcasses and skat in spots. What more evidence is required by the skeptics?

I know I'm a few days late on this story, but I've purposefully tried to keep a low profile. I didn't want the authorities knocking on MY door based on the evidence presented. Namely...

A) This Bigfoot sighting in Midland County is a mere hour's drive from my home, and logistically it is more than possible that it was I who defecated in this man's woods. (upgraded to "PROBABLE" for those who know me personally)

2) Bigfoot apparently eats pizza in the wild, based upon the empty pizza boxes found in the woods there. Well it just so happens that I LIKE PIZZA!

c) This man originally told authorities he first thought the creature was a hunter in a ghillie suit on his property. Well, I'm not proud of it, but there might be a picture or two from my college days of me in girlie suit! I don't think one looong weekend wearing a girlie suit should label someone, and... Oh, I see I misread and it says "ghillie suit", whatever that is. so nevermind #3.

In conclusion, there are a ton of pizza joints within a 15 minute diameter of the spacious and cozy Chattering Teeth Studios, but I would drive an hour for some really good Bigfoot pizza.

BLOG EXTRA!! It has been almost a year since my last Bigfoot post where I posited the question, "Does Bigfoot use our nation's roadside Rest Areas?"

...what dude hasn't excited a roadside rest area bathroom, only to warn approaching traveler's, "HOLD YOUR BREATH, I'm pretty sure Bigfoot was in there!" And "I would avoid the final stall if I were you. 'Squatch left tracks." 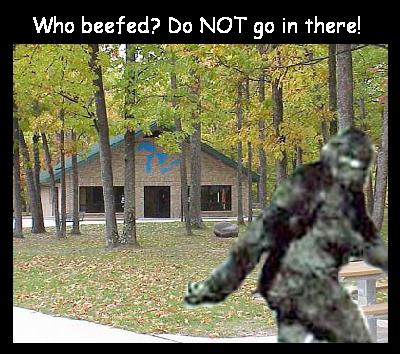