North Korean releases disturbing video of a crippled cruise ship flailing about in the Sea of Japan after rudder had taken merciless fire from the supreme leader's sidearm. Unlike the earlier propaganda video of a US aircraft carrier on fire - this one appears to be legit.


Meanwhile, Kim Jung Un has his top chef executed due to misunderstand after being told there was a catastrophic "lunch failure" instead of "launch failure" in latest missile test. The top rocket scientist has been demoted and is now responsible for successful hoagie hero sub lunch launches. A despot has to eat. 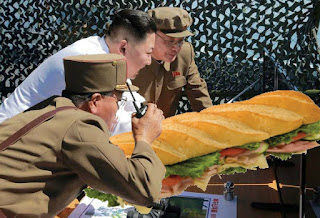 I leave you with this:
What happens when an unstoppable farce meets an immovable object? 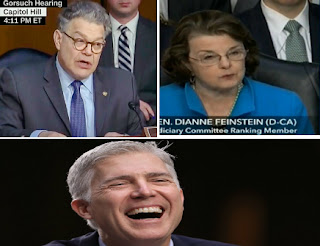 Do you view Roe as “super precedent?” Feinstein asked.

Gorsuch: “It has been reaffirmed many times, I can say that, yes.”

Feinstein:  Are you REFUSING to say that Roe v. Wade is a Super Double 'D' Duper expialidocious precedent?
Posted by DaBlade at 7:34 AM