Chattering Teeth News - Initial reports of plans for a Chinese Space-based "Laser" may have been the result of a language barrier between Washington and Beijing officials, this CTN reporter has learned made up. 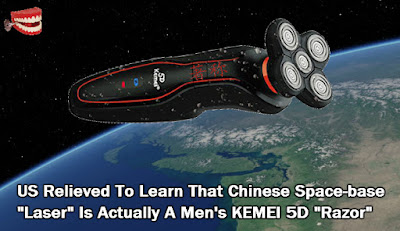 I was horrified when I read the initial reports about the Chinese military developing powerful lasers, electromagnetic railguns and high-power microwave weapons for use in a future “light war” involving space-based attacks on satellites.

I decided to get to the bottom of it. I don't mean to brag, but we here at Chattering Teeth News are on the cutting edge of breaking news and gossip - staying ahead of the curve with random google searches and a talkative inebriated homeless man and a hooker I keep on retainer.

I was able to procure the phone number of a high ranking Chinese government official with inside knowledge regarding this Chinese star wars space laser using one of my anonymous sources. I dialed the number...

Somewhere... in the ghetto district of Shanghai, China... in a dark and dank waterfront medicine shop, the proprietor answers his ringing phone... 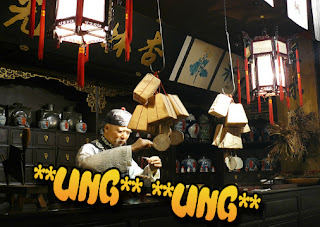 Me: Yes, my name is DaBlade and I am a reporter for Chattering Teeth News, a very popular blog for a handful of readers in the U.S., have I reached the party with whom I am speaking?

Me: I have no clue what you are saying, so let me get right to the point. What about these Chinese space lasers I keep reading about?

Me: Huh? Wait! I think I've deciphered this code you're using. You're saying the Chinese are upgrading their current fleet of space-based straight razors with the new electric solar powered Men's KEMEI 5D "Razor" with nose trimmers? That the 5-ton Razor will be stationed in low-earth orbit in order to give the Chinese cosmonauts the absolute closest shave possible?

Me: Thank you, sir... I think. Thank you for your clarification on this, and I thank you from a grateful nation.