From the White House Gates to the Pearly Gates

Not sure why I found this funny, but this is the image that sprang to mind when I read that headline. I have no idea why Bill Clinton would be driving the Oscar Meyer hot dog car to the White House check point, or why he is such a sharp dressed man. Maybe he is on another bootie call and trolling for under-aged interns, or maybe its just because Hillary has threatened to come out of the woods.

No matter... once I think of an image, I have to 'scratch the itch' and post it or I can't stop thinking about it. I know. I need blog counseling. 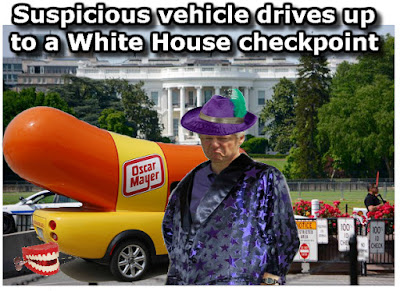 I have the same excuse for this next one.When I heard that Chuck Berry had passed, the first thing I though of was the scene from Back to the Future when Marty McFly (after time traveling back in time) is doing his best Chuck Berry  version of Johnny B. Goode (Before Chuck writes the song), and Chuck's cousin, Marvin, gives Chuck a call... 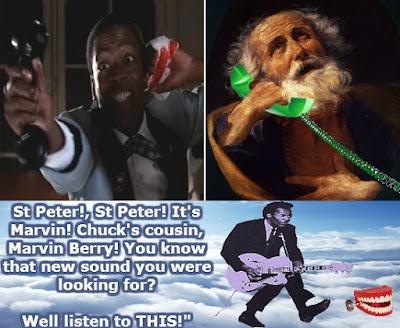