The Bridges to the Denver Convention

Hillary appeared on ABC's This Week with George Stephanopoulos, where he: "pointed out that radio talk show host Rush Limbaugh has encouraged Republicans to vote for Clinton to divide the Democratic Party, prompting one of the lighter moments of the show. He's always had a crush on me, Clinton said, as the room of about 200 people erupted into laughter.

Now, just in time for the summer motion picture season... a sure-fire blockbuster sequel to The Bridges of Madison County. Make way for The Bridges to the Denver Convention. 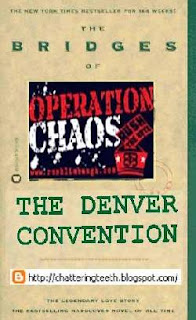 While her husband Bill and daughter Chelsea are away campaigning on her behalf at some flyover state fair in the Summer of 2008, Rush Limbaugh happens upon the Hillary Clinton in the local cigar shop and asks her for directions to her campaign headquarters. Rush explains that he is on a self-appointed special assignment from his EIB command headquarters to make a contribution to her campaign. He explained that it was all part of his Operation Chaos, a brilliantly conceived and flawlessly executed strategery to keep her campaign alive, thereby throwing the Democrats in turmoil. She agrees to show him to her campaign HQ (as she never met a contribution that she could refuse) and thus begins the bittersweet and all-too-brief romance of her life. Alas, it was over all to quickly for her, as they returned to their separate lives. She writes it all down in her 3-volume diary. Her favorite memory was how Rush would tell her, "I can make you feel like a real woman," as he unbuttoned his shirt. "Once Rush removed his shirt, I knew I was in the presence of A REAL MAN, as he threw it at my feet and stated, 'iron it'," she wrote lovingly.

"This is the story of love that happens just once in a lifetime -- if you're lucky"...
Posted by DaBlade at 7:41 AM