The curse has been broken! I watched the series clinching victory of the Detroit Red Wings over the Dallas Stars on the big screen TV! (I had been self-banished to the bedroom 9" B&W TV when it became clear that my wide screen was cursed). When the Wings went up 3-0 in the series, I decided to chance it and this strategy almost backfired, as Dallas won the next two. But I stuck with the Big screen, refusing to "go into the light". The demons were finally chased away and it wasn't even close, as the winged wheelers dominated from the first drop of the puck. So it's back to the Stanley Cup Finals, where the Wings will face Pittsburgh and the boy wonder Sidney Crosby. Wings in 5.

But that's not all Deee-troit sports fans! It's the Pistons vs. Celtics in the Eastern Conference finals! I have a very strong dislike for Boston (probably a hangover memory from the "Bird stole the ball" days). Anyways, while the Pistons don't have any Swedes on the team, they have the next best thing. They have a "Sheed". Pistons in 6.

I haven't taken the time to compare the schedules to see if the Pistons and Red Wings play on the same night. Just my luck, I will have to constantly be switching channels between basketball, hockey, and dancing with the stars. Oh well. At least it will be in High Def!

Hey you peoples that aren't Deee-troit sports fans. Don't hate us because we are beautiful right now. Remember. We also have the Lions and Tigers in our town.

Speaking of the Tigers, did you catch the news? Tiger Woods will be putting on a clinic at Comerica Park on June 24, during the Buick Open time frame. It will be nice to see a Tiger succeed again in Comerica. Larry Peck, marketing manager for Buick golf, stated that, "the details of exactly what Woods will display haven't been finalized, but it's possible a limited-distance ball might be used for some of his shots." Well that must be the Deee-troit Tigers problem. They are playing with "a limited-distance ball."

Thanks to "MSgtEd" in Flint for this picture: 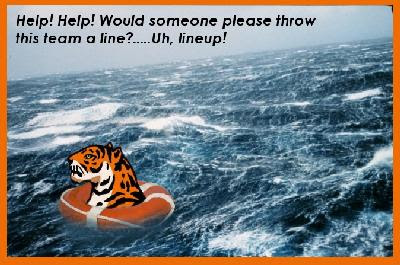