You've already heard about Hillary's comments in a USA Today interview where she makes the claim of having broader appeal and cited an AP article that "found how Senator Obama’s support among working, hard-working Americans, white Americans, is weakening again, and how whites in both states who had not completed college were supporting me.”

What is Hillary up to?

Is this a last gasp effort to keep her campaign alive, or is this a scorched earth policy?

Annie Hillary...
"Whatever you're thinking about doing,
please don't do it." 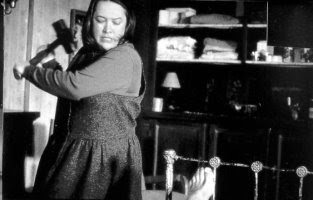 My guess is on the later, and that she grudgingly accepts that Obama will get the nod this go-around. I buy into the theory that she thinks the presidential "throne" is her destiny, and her best chance now lies in 2012 on the heels of a McCain first term. Of course, to get there from here is the tricky part. She has to hobble Obama (that "cockadoodie!") prior to her dropping out of the race, then act like she is his "number one fan" by half-heartedly campaigning on his behalf.

Charles Krauthammer-ed the nail on the head (or the foot on the ankle) in his latest piece where he makes the point that Hillary has finally figured out a winning strategy to beat Obama, but "it's too late". He writes:

It wasn’t until late in the fourth quarter that she figured out the seam in Obama’s defense. In fact, Obama handed her the playbook with Jeremiah Wright, William Ayers, Michelle Obama’s comments about never having been proud of America, and Obama’s own guns-and-God condescension toward small-town whites.

The line of attack is clear: not that Obama is himself radical or unpatriotic, just that, as a man of the academic Left, he is so out of touch with everyday America that he could move so easily and untroubled in such extreme company and among such alien and elitist sentiments.

Makes sense to me. She can't beat Obama by trying to draw distinctions in ideology and policy (one zebra looks like another) but she can whip him on the cultural front (Wow. Did I really just type that?). Her old strategy was a contest of "cult of personality" that favored Obama. The too-late winning strategy is sort of a "culture of personality", which Hillary only wins by comparison with this guy.

Hey Hillary. You can't call a time-out when you don't have any left!