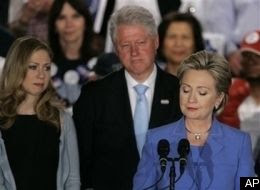 Apparently she is not taking the hint.

Sen. Hillary Rodham Clinton lent her presidential campaign another $6.4 million over the past month, adding to the millions she has lent herself this year.

I wonder what kind of interest she is paying herself. WAIT A MINUTE! Could this be the reason she is staying in the game?

"Ah! It's a profit deal! Takes the pressure off!... Take a chance and win some crap!" (Navin Johnson epiphany again)

Dennis Miller advises Barack Obama not to select Hillary as his running mate on the basis of the above AP photo: "I would never have Bill Clinton over my shoulder. I haven't seen a guy that florid... He looked like an albino at spring break," Miller quipped.

Rush Limbaugh attempts to read Bill's mind in this picture. "There have been 43 presidents of the United States. Forty-three. And I, I'm the first damn one of them whose wife wanted the damn job, too; and I gotta sit there and act like, 'Whoa, that's great, honey! What can I do to help you?' This woman has been trying to take over every day of my life!"
Posted by DaBlade at 6:47 AM