Monday is Memorial Day, but yesterday was a memorable day. 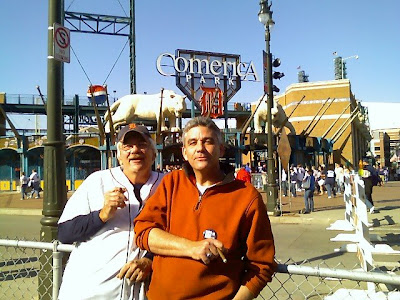 Pictured: My brother Snapper and I enjoy a cigar while waiting for the start of the baseball game in the Chelis Chili corral. Mr. & Mrs. Snapper invited Mr. & Mrs. DaBlade along to help them celebrate their 32nd wedding anniversary. Mrs. 'Blade had a great time, despite the fact that she is not a fan of baseball.

2:15PM: Begin the one hour-ish trek to Deeee-troit from Flint for the 7:05PM start of the Tigers game. Two other Dee-troit teams had playoff home games this night. The Red Wings hosted the Penguins in game 1 of the Stanley Cup Finals, and the Pistons played the Celtics in game 3 of the Eastern Conference finals. Mercifully, The Dee-troit Lions were nowhere to be seen this night.

3:30PM: Parked in to the Greek Town Casino ramp and wound our way through the casino area making our way down to the street. Oh, the familiar sights and sounds of the casino - the blinking lights and bells from the slot machines - the folks pulling the handles, with sunken and hollow eyes and lost looks of despair - it was like a siren's song - trying to pull me in for "just a quick play or two at the Black Jack tables". But we were on a schedule, and if there is anything Mrs. 'Blade dislikes more than baseball, it's smoky casinos. Snap simply stated, "let me break even 'cuz I could really use the money!"

3:30-4PM: Walked along the store fronts of Greek Town. There were sidewalk artists and street corner musicians. Downtown was alive. We stopped at a diner to discuss dinner plans over a beer, and Mrs. 'Blade began throwing back her Peach Schnapps concoctions at an alarming rate.

4-5PM: We ate dinner in the upper loft of the New Parthenon Greek restaurant. Very nice! Started with an appetizer of Greek sausage and a plate of saganaki, which is flaming cheese that the waitor lights on fire at your table with a loud and drawn out "OOOOOOO_PPPPAH!". Main course included lamb chops, kebob, spinach pie, baked stuffed eggplant, grape leaves stuffed with something good... I liked (except for the fact that one of the armless Greek sculpture dudes seemed to be staring at me).

5-6:30PM: Short walk down Brush Ave. to Ford Field, with a left turn and one block walk to Chelis, where the beer was cold and the DJ was playing decent classic rock. Stayed there enjoying the beer, music, and cigars, watching the black-market ticket commerce. Very interesting.

7PM-2AM: Tiger baseball! Are you kidding me! 19 runs to 3 trouncing of Minnesota! We had great seats in right field and everyone cheered Magglio Ordonez wildly every time he took the field. He had a monster game. The fifth inning seemed to last for 4 hours, according to Mrs. 'Blade. A good 'ol fashioned butt whooping.

After the game, we made our way across the road to the Hockeytown Cafe with herds of other fans with the same idea, to watch the end of the hockey game. I never realized that they had a large screen with theatre style seating for just such an occasion. Awesome! Another Deee-troit administered butt whooping! SWEDE!

The walk back to the car took a little longer than necessary, as the Fox Theatre's large crowd of Color Purple goers all wanted to go the other way. One elderly man, dressed to the nines, asked me, "who won the game?" I told him that Tigers won 19-3, and the Wings won 4-0. "What about the Pistons?" Never mind.

Deee-troit was looking good last night!
Posted by DaBlade at 11:19 AM