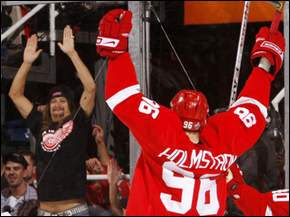 Tomas Holmstrom celebrates his goal in the first period as Detroit rocker Kid Rock cheers on...

Sidney Crosby? Evgeni Malkin? Anyone seen Pittsburgh's stars yet, buried under all that red, outscored 7-0 in two games? The Penguins' top three centers, Crosby, Jordan Staal and Malkin, have been about as effective as Crosby, Stills and Nash, only with mangier beards.

Sticking with the music theme today, let's talk Hillary Clinton (sour note!). Did you see where her husband accused his own party of covering up the fact that Obama is a loser in the fall? Bill is quoted as saying, "Oh, this is so terrible: The people they want her. Oh, this is so terrible: She is winning the general election, and he is not. Oh my goodness, we have to cover this up."

Bill is right. Well, even a stopped clock is right twice per day. Hey Bill? When your party's Jimmy Carter led superdelegates officially kick Hillary to the curb, are YOU going to drive her home?


Who knew that Benjamin Orr was singing about Hillary way back in 1984?:

Whos gonna hold you down
When you shake
Whos gonna come around
When you break
Posted by DaBlade at 7:19 AM