President Bush in Israel at the Knesset: 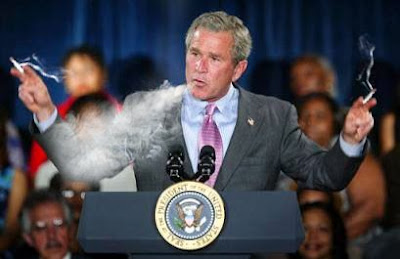 THE PRESIDENT: "Some seem to believe that they are not bound by laws. They feel that they are not held to common civility, decency, and manners, and that they can engage in chain-smoking cigarettes in smoke-free areas. We've seen this foolish elitism before. We have an obligation to call this what it is: the false comfort of nicotine addiction which has been repeatedly discredited by history." (applause)

BARACK OBAMA: "John McCain and President Bush are being dishonest and divisive. That's some politrickin' being played!"

WHITE HOUSE REACTION: We were talking about Sean Penn illegally smoking at the Cannes film festival in France, not "Smokin' O".

Hmmm. Somebody a little defensive? The Kool-Aid drinking liberal democrats may buy your "bloated hands" defense, but we know who the gloves best fit.
Posted by DaBlade at 9:33 AM