FLINT, Michigan -- The saga continues over a downtown landmark now that a Genesee County judge has overturned an arbitrator's ruling that the city must pay millions of dollars to take over the dilapidated Genesee Towers... It reverses an earlier decision by... a former Genesee circuit judge, who ruled the city would have to pay more than $6 million to Genesee Towers owners... to take over the site.

Realestate values are dropping all over. Why should this building be any different? Not even gross mismanagement of this by "the Don" will save the owner this time. The only reason for the inflated value in the first ruling was because the "good" mayor's plan had backfired. Appears to me that he had twisted arms to have the city continue to value this building at $7 million for confiscatory tax purposes, hoping to leverage the owner into dumping the property prematurely at a cut rate. This strategy failed, when the earlier judge said, "hey, if the city says it's worth $7Mil, who am I to say differently?"

Meanwhile, "Genesee County's tallest building" (the second tallest I believe to be my backyard pole barn) has sat vacant for the last 10 years plus. Just left to decay and become an eyesore and another black eye for the city. Heck, even in my old Burton neighborhood, when a porcelain throne was retired to the front lawn (after serving it's primary responsibilities with honor) it was at least "prettied up" with a bloom of flowers in the bowl. I guess you can't put lipstick on a pig in a pantsuit.

So now the question becomes what to do with this building. Tear it down or retrofit it? If the building is salvageable, what should it be retrofitted as? Remember, this is Flint. How about the World's tallest Coney Island Restaurant (with a Halo Burger on the top University floor for the fancy customers)? Auto World II with the Tower of Terror thrill ride? Take the floors out and have about 30 first floor college dorm rooms that are 17-stories high?

I'm sure you agree that these are all great ideas. But I believe I may have come up with the game winner here ladies and gentlemen, but first let me tell you about a recent repeat episode I saw of the TV sitcom, Scrubs, titled "My Porcelain God". The hospital janitor installs an "epiphany toilet" on the roof "claiming that he can look at his life better than if he used a germ-infested stall in the building." It also affords a panoramic view of the city below, allowing for free thinking and problem solving - all while taking care of necessary business.

I think you can see where I'm going with this. Install an epiphany toilet on the roof of the Towers and make it available for use by downtown workers, city residents, and for the expected influx of tourists. Charge at the door, or allow monthly memberships. But wait! That's not all!

Might as well put the by-products of the epiphany toilet to good use and retrofit the Tower's innards with the Sweedish gizmo everybody is talking about.

The city and a Swedish company plan to turn the city's human waste stream into fuel for powering vehicles or generating electricity... the partnership... could make Flint a national leader in the biogas industry. The news comes as other fuel costs soar and worries over fossil fuels linger. 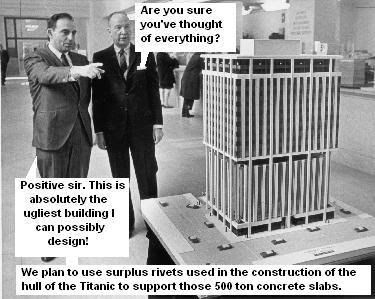 Brawl at Chuck's Place (UNRelated story) ("WE have no knowledge of either of these events," claims local golf league.)
Posted by DaBlade at 6:49 AM