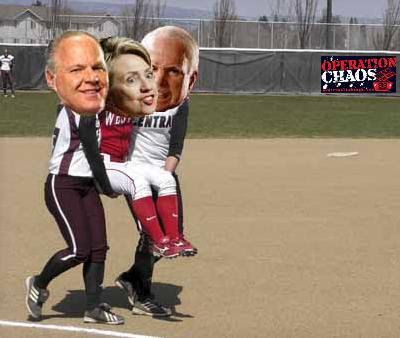 It is a fact that Republicans are crossing Over to vote in the Democratic primaries in large numbers. However, the question being asked is: Is this a show of sportsmanship, like what was on display in the girls softball game last week between Western Oregon and Central Washington University, or is this a case of "mischief-making"?

Since the start of the primary and caucus season in January, Republican voters have been crossing over in increasing numbers to vote in Democratic contests — supplying up to 10 percent of the vote in states that allow such crossover voting — and they are expected to play a pivotal role in the fiercely contested primary here. What is less clear, however, is the motivation for their behavior: are they genuinely attracted by the two Democratic candidates? Or are they mischief-making spoilers, looking to prolong a divisive Democratic fight or support a candidate Mr. McCain can beat in November?

Is this a rhetardical (sic) question?

Remember way back when Hillary Clinton was the presumptive nominee and everybody was just waiting for the time to corronate her? And then remember when the messianic Barack Obama won the Iowa primaries handily on the "style over substance" message of "Hope" and "Change", vaulting him into a seemingly insurmountable lead? And remember when Rush Limbaugh and his Operation Chaos helped throw the Democratic party into turmoil by ressurecting Hillary's campaign and allowing voters a chance to find out who Barack Obama really is? Wasn't that awesome!? Did you see Die Hard?

Yes, Chris, I saw the movie Die Hard, and yes it was awesome!

Some would say that Hillary is metaphorically walking barefoot on the broken glass of her own campaign and the delegate count is against her. But the longer she stays in the fight, the more obvious it becomes that Obama is a far far left socialist with no experience or clue. The Democrats are now realizing that they have two worthless candidates, and they are pretty much stuck with giving the nod to Barack Obama when all is said and done. Hopefully, this won't happen until the August convention in Denver, allowing for more blood to spill on the floor. The fact is, Obama is unelectable (even against McCain).