Rasheed Wallace of the Detroit Pistons has been fined $25,000 for his use of profanity and criticism of the officiating following Wednesday night's loss in game 5 to the Celtics. His next technical foul earns him a one-game suspension. Still no word on whether the league will fine the refs working game 4 of the Spurs and Lakers game, where they totally blew the game-ending no-call. I think the fine should be a set percentage of the amount the closest referee had riding on the game with their bookie.

'Sheeeed!. You love him or you hate him. I think it all depends on whether you are a Pistons fan or not. For me, it all depends upon if he delivers in game 6 in the conference finals. Then game 7. Then in the finals. That's it. That's all. Just deliver. Go ahead and keep chatting with those "cats", just don't get T'd up. As for the $25K, that is like having to donate to the office "quarter curse jar" for you and me.

What exactly did he say?

That's it? I've said worse after an order screw up from the fast food drive-thru. When I nic myself shaving. After every other shot in golf. When I hypothetically ram a Your Ride bus and crinkle my hood at the corner of Dort and Court. I'm sure there are other examples, but I have to jump in the bleepity bleep shower so I'm not bleeping late for bleepity bleep work.

So will they do it tonight in game 6? I have my prediction, but I'm keeping it to myself. I'm not sure how these jinx fairies work, but I know that they have been following me. That's why I have censored all blob predictions on that other team from Detroit who plays that game that uses curved sticks (shaped like Al Gore's propaganda global warming graphs) and skates around on ice (whats left of it, right Al?). Nope. Not gonna tempt fate until they are sipping from a very large cup. 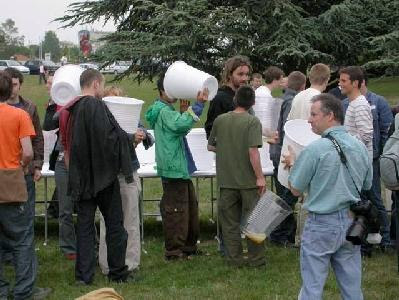 Rasheed bleeping Wallace and his (explicative deleted) code of freakin' conduct:
"I don't talk about nobody's mom, wife or kids. There is a line and I don't cross it."

From The Onion: NBA Names New Foul After Rasheed Wallace:
Posted by DaBlade at 7:28 AM