Menudo-bama: your next American Idol?

The young, unvetted, and inexperienced candidate versus the "been around the block" wily veteran. Of course I am talking about last night's sing-off between 16-year-old David Archuleta and 25-year-old David Cook. Hey, maybe becoming the next American Idol isn't quite on the same level as becoming leader of the free world, but even Drudge saw the analogy with this splash - ELECTION NIGHT: 'IDOL' FINALE DETAILS...

I have gone on blog recently of my dislike for that squinty-eyed and grinning like an idiot kid (Yes, Obama fits here too, but I'm talking about Archuleta). I've predicted that Cook would spank this little pseudo-humble child Magoo, or so help me Sanjaya, I swore I'd never watch again!

It's not that the little punk can't sing. In fact, I would readily admit that the cadence, rythym, and tone of his voice is hypnotic. Just like Obama, every utterance out of little David's pie-hole is sweet nectar to the ears. But just like Obama, it's empty rhetoric that will never grace my 8-track car stereo. I don't buy what either Obama or little David are selling.

I will concede that, if given a choice between the two, the country would be in safer hands with Archuleta at the foreign policy wheel and Obama being the front man to the next Menudo. 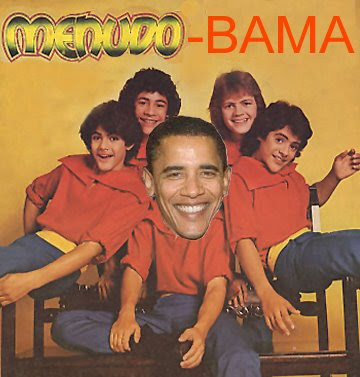 The crowd of mostly pre-pubescent teens in the audience went crazy nuts before, during, and after little David's songs. There were high-pitched screams of adoration, with several star-struck gals holding up signs. One sign read "I NEED A PROM DATE". I was reminded of this scene:

And so it appears that "little d" and "little o" will win the nomination in their respective contests. (I predict) Archuleta will become the next American Idol in the Idol convention tonight, but fall flat in the general election (retail sales), getting out-sold by the second place Cook by a large margin. The deck is stacked. Even the superdelegates of Randy, Paula, and Simon heaped nothing but praise on the kid, afraid of the lash back from the enthusiastic, yet intellectually vacuous crowd.

Maybe I'm wrong and little d loses the Idol crown and Hillary gets the nod over little o in the Democrat race. Erin Carlson, AP writer, asks us to "Imagine all the people, voting against such a sweet, shy kid. Like kicking a puppy."
Posted by DaBlade at 7:25 AM