Times really are crazy when I agree with any utterance coming out of crackpot George Soros' piehole. He is quoted as stating that the financial system "was placed on life support, and it's still on life support. There's no sign that we are anywhere near a bottom." George and I agree on this. We are peas and carrots when it comes to the dire situation we now find ourselves in. However, I will not be throwing back cold ones at the local watering hole with George Soros and Helen Thomas anytime soon. While I am distressed at our current plight, I picture a smirk on his pudgy red face as he rubs his hands together in glee at the prospects of the demise of free market capitalism.

The U.S. economy is like a patient in intensive care. The economy lays covered in white linen sheets on a stainless steel bed on wheels. The patient is surrounded by blinking monitors with medical personnel scurrying back and forth to the incessant beat of the EKG machine. It is touch and go for the patient, and a recovery will depend on three factors. 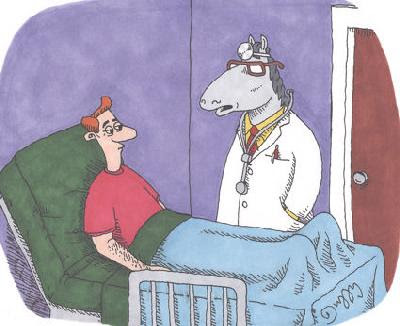 First, that this patient's loved ones pray that God help him recover from grievous injuries. I believe this country was founded under Divine Providence as a Christian nation. It is my hope we still have a necessary role to play in His plan, a role that can't be played if we allow ourselves to slide down the path of socialism and careen into it's abyss. For this reason, we must pray very hard that Obama fails.

Second, that the patient receive necessary care and proper medicines in time. uh oh, this one might be a problem. Doctor Obama is putting rat poison in the IV bag with this spend-a-thon of a so-called stimulus that will run up the deficit by rewarding failure. This is exactly opposite of what the patient needs. This, coupled with his plans to slash the deficit *snork* to a mere $1 trillion in 2010 and 2011 *gasp*, and a paltry *ahem* $533 billion by 2013. Is he bipolar, you ask? I know. I'm confused too. On one hand, the messiah-in-chief is spending money like a khat-chewing Kenyan tribal chief, while on the other hand he tells us that he needs to "get exploding deficits under control".

Cheech: How'd he do that maaaan.
Chong: Man he had some magic dust man.

Magic dust or narcotic leaf chews aside, he plans to tax the hell out of the producers in this country, that's how. Spend, spend, spend. Tax, tax, tax. He will do so with as much vitriol and anger toward the producers and achievers that make this country work as you will find with any lib leftwing kook on the Daily (Wac)Kos or Huffing (Glue) Post.

Lastly, a recovery will come down to the overall resilience and will to live demonstrated by this patient, the U.S. economy. I believe that we will rally. I don't believe Obama and his circus clowns can permanently destroy this great country, what it was built on and what it stands for, despite their best efforts. More and more Americans every day are coming to see Obama as the charlatan that he is. There will be a great tsunami of backlash against Obama and the democrats in 2010. His policies will be quickly reversed and then we can once again start down the correct road leading to prosperity.