Monkeydarts takes a look at Obama's vetting process and asks (with tongue firmly in cheek) whatever happened to those intrusive questionnaires that prospective members of the Obama team were required to fill out? 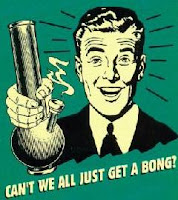 "It was completely inadvertent," says Daschle.

"I apologize to President Obama, to my colleagues and to the American people," said Daschle, in his trademark sissy mary voice.

There is nothing, apparently, that can derail the Obama peace train. Not even if video comes out today of Daschle sucking on a bong pipe full of dope with Michael Phelps.