MGM's 'golden eyes' billboards called sinister
The MGM Grand Casino has started a firestorm of backlash from a local minister who sees only Satan in this new "teaser" billboard off the Lodge Freeway in downtown Detroit. 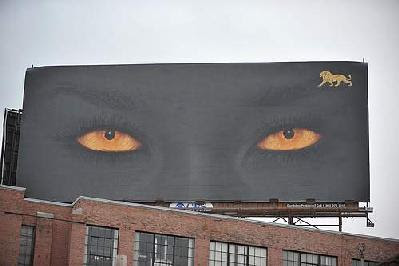 The Rev. James A. Smith is mounting a campaign to have the sign removed, stating that it looked like a demon and was scaring the children. Yvette Monet, a spokeswoman for MGM Mirage, poo-pooed the whole demon angle and stated that the company was "excited to hear the ad is generating some buzz".

And then her head did a complete 360 while she projectile-vomited pea green soup.

I don't really get the billboard's tie-in with MGM. It seems like there would be a better way for the billboard to promote the casino than a huge pair of anonymous eyes on a black background. These eyes can be described as "dark and evil" and resemble a pair of snake eyes - which is a losing dice roll in craps. The subliminal marketing message seems to be...

"Come to our casino and crap out, you big loser!".

If I were in charge of this marketing campaign, I would want my billboard to project a message of HOPE to the commuters below. A message that promised them untold riches, all with little or no effort on their parts. Money for nothing! I would want the message to appeal the lowest common denominator in folks and "set the hook" so that they would believe that "Yes we can"! I would falsely promise to the penniless gamble-a-holic's that if they would continue to believe, then the casino would reward them with piles of cash! Money the casino would confiscate from other more successful gamblers and card sharks in order to give to them.

Of course my true efforts would be to remove as many folks from their money as possible and to get them to continue to throw good money after bad. My billboard will turn these commuters into willing supplicants as they sit on their behinds in my establishment and further empower me over their lives. Meanwhile, their fortunes circle the drain. 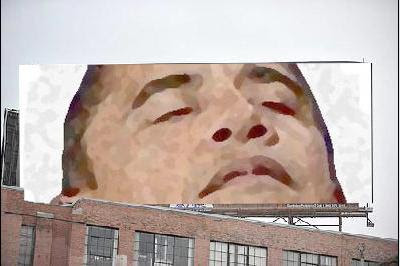