Alala Akbar! Environmentalmidgets are at it again. 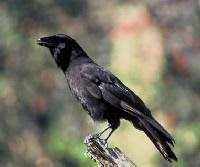 Did you know...?
Hawaiians call this bird "alala". We call them "crows". Alalas were once widespread on the island of Hawaii, but now survives only in captivity. Mainland crows can be found on treetops, electrical wires, buildings, lawns, parking lots, athletic fields, roadsides, towns, garbage dumps and fields across the continent.

So if one desired to see these black cawing devils back on Hawaii, the obvious solution would be to:
(A) For just a few bucks, send them a cargo hold full of ours on the next steamer... OR
(B)

HONOLULU – Federal wildlife officials say they plan to spend more than $14 million to prevent the extinction of the Hawaiian crow, one of the rarest forest birds in the world.

The endangered bird, known as the alala, is only found in captivity on the Big Island.

Two bird conservation centers are home to 56 alala. The bird hasn't been seen in the wild since 2002.

The U.S. Fish and Wildlife Service says its five-year plan to restore alala populations includes protection of habitats and management of threats to the species.

If you are an environmentalmidget, then the obvious answer is "B". While the Hawaiian crow and the American crow are virtually identical (except for the tiny and colorful flower leis around the alala's neck), no amount of money should be spared (or printed) in trying to reinsert this bird. Elderly Hawaiians wax nostalgic about the good old days when the alala were so prolific, they were actually ignored and even thought of as nuisances (Just like mainlanders do now).

Oh, and by "threats to the species", they must mean "climate change". Certainly there couldn't be any other reason these birds are no longer free in the wild.

Scientists also believe that the 'alala's natural enemy, the Hawaiian hawk, has killed many of the rare crows, especially in areas where ungulate grazing has reduced understory cover.

In the 1990s a program to remove eggs from wild 'alala nests and raise the chicks in captivity was accomplished by workers from the Peregrine Fund under contract to the Fish and Wild Service.

Sixteen birds from that program were released into the wild, but the hawks killed five, and the rest died from other causes. Releases were halted in 1999 because experts feared too many deaths would deplete the bird's genetic diversity.

Did you know...?
that a group of crows is called a "murder"? The Hawaiian Hawks say, "cawl it what you want, just don't cawwwwl us late for dinner"!

Gotta love the greenie weenies! They'll spend weeks cleaning oil off a seal only to have their release party spoiled by the hungry Orca offshore.
Posted by DaBlade at 7:17 AM