The pot-bellied North Korean dictator, Kim Jong-il, launched his rocket that he said was equipped with a communications satellite and not the Illudium PU-36 Explosive Space Modulator 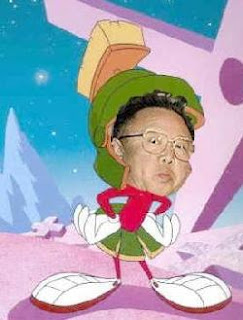 SHOCKING TRUTHS about the recent North Korean rocket launch:.
LIE: The rocket carried a harmless experimental communications satellite made of rainbows and peppermint candy canes and fueled by Everlasting Gobstoppers that did not hurt the environment.

TRUTH: The launch was cover for a test of NK's long-range missile technology so that it can further threaten and blackmail the West. They now have a ballistic missile that theoretically could be armed with a nuclear warhead. The "boy named Kim" might even sell this technology to Iranian president Mahmoood Ahkmadeenadude, causing President Obama to step up his foreign policy startegy of blaming America with eloquent superfluous rhetoric.

LIE: The satellite is transmitting revolutionary hymnes from radio free DPRK's top 20, including the timeless 'Song of General Kim Il Sung' and the danceable and effervescent 'Song of General Kim Jong Il'. Inclusion of remixed hip hop versions by the popular Korean band, DK Jazzy Kim and the Fresh Dongs has not yet been confirmed.

TRUTH: The ugly revolutionary melodies of 'Kwangmyongsong-2' that Pyongyang plans to beam at us from space.
WARNING: Please be seated and hold your loved ones close when clicking the previous link. CAN YOU HANDLE THE TRUTH!?
Posted by DaBlade at 7:43 AM