Just shaking my head after reading about Georgetown University's compliance to the White House demand that a Jesus monogram be covered up during Obama's economic speech there. Another Obama outrage.

"The White House wanted a simple backdrop of flags and pipe and drape for the speech, consistent with what they've done for other policy speeches," she wrote. "Frankly, the pipe and drape wasn't high enough by itself to fully cover the IHS and cross above the GU seal and it seemed most respectful to have them covered so as not to be seen out of context."

Will it surprise anyone when similar demands are made of Notre Dame in advance of the Obamasiah's planned commencement address in May?

A White House advance team does a walkthrough:Let's see. Someone needs to get a really, REEEALLY big tarp and throw it over that large gold dome with that chick on top. Looks out of context. We are going to need all the crucifixes coming off the walls. What is this church doing here?[pause] Bascilica of the Sacred what? Get another tarp. What is this cave thingy with the lighted candles doing here? 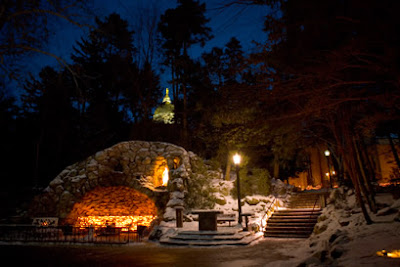 I don't know what Grotto means, and I don't care that it is a one–seventh replica of the famed French shrine at Lourdes where the Blessed Virgin appeared to Saint Bernadette. Get another tarp. 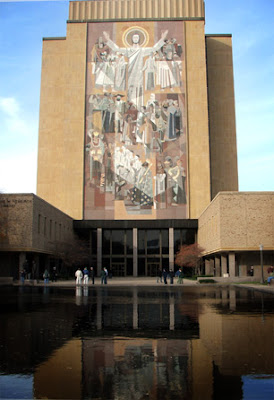 Oh! The chief thinks that's him, so it can stay.
Posted by DaBlade at 7:37 AM