PROMISES, PROMISES: Is Obama dog a rescue or not? 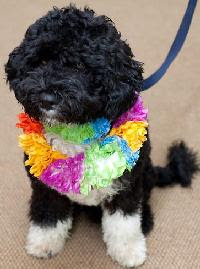 WASHINGTON – Is Bo a rescued dog or not? Did President Obama keep or break a campaign promise in picking the purebred as the family's new pet?

Horrors to even ask such a question! Accusing our president of possibly lying about the origins of his new family dog Bo? This, after he single-handedly saved Captain Richard Phillips from the Somali pirates!? How can you question our commander-in-chief after having ordered the end of a week long standoff between the might of the United States Navy, with it's behemoth warships surrounding a rubber raft full of untrained teenagers with heavy weapons?

Back to the dog story:

The Obama girls had been pestering mom and dad for a pooch for some time. Barack and Michelle stated numerous times during the campaign that they wanted it to be a rescued dog from a shelter. This always got the hopes up of his half-brother who lives in a shack in Kenya. Certainly if Obama wanted to rescue a dog from a shelter, he would want to do the same for his own blood? Last I heard, he is still waiting with his nose pressed up against the shanty window hoping to see the presidential limo wind down his dirt path.

I think we have a right to see the doggy papers. Obama admits that Bo spent time in his doggie youth in a Portuguese water dog's madrassa, but insists he was born in Hawaii.

A "quasi-rescue dog?" Because this pure bred lived in a mansion prior to the White House?

Now we know that Bo came out of the same "Hope and Change" litter as Sen. Edward Kennedy's Portuguese water dogs. It is apparent that this dog was bred for the sole purpose of becoming the Obama's family dog, and that the original owner was part of the false trail laid down by his handlers to avoid controversy. Not that I care what dog he owns, or what country is on his birth certificate. This is just another example of Obama saying one thing and doing the other.

Maybe some of his idolizers are getting the message that his teleprompter can not be trusted...

President Obama's most liberal supporters say they are dismayed and disgusted because this administration is invoking the "state secrets" privilege -- just as former President George W. Bush did -- to shield eavesdropping programs from public exposure.

"I wasn't happy when George Bush asserted that he could do these things and I'm not happy that President Obama is now agreeing with George Bush," said Jane Hamsher of Accountability Now.