Our "comedian-in-chief" Obama is bombing

* If you're like me, then every Friday morning during Lent you pack your favorite lunch consisting of Tuna Fish and rare imported Bangladeshian Irrawaddy dolphin meat on rye.

Whoa whoa whoa! Of course I am only kidding! I don't pack my own lunch, my wife makes me the tuna-dolphin sandwich (that is, if she knows what's good for her!) 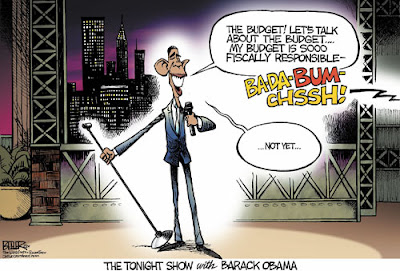 "Each country has its own quirks and own particular issues that a leader may decide is really, really important, something that is non-negotiable for them," Obama told a news conference.

"And what we tried to do as much as possible was to accommodate those issues in a way that did not hamper the effectiveness of the overall document," he told the jam-packed room of both foreign and American journalists.

Describing his approach to world affairs, Obama said America was a "critical actor and leader on the world stage," but that it exercises its clout best when it listens to other countries' concerns.

Obama declined to make explicit comparisons between himself and President Bush, but the comments were intended to mark a contrast from what critics of Obama's predecessor said was a tendency towards a "go-it-alone" approach.

So How's that approach working with that little pot-bellied North Korean dictator? I'm sure if you just talk to him and listen to his concerns.

Obama to NK pot-bellied dictator, Kim Jong-Il: "I'll trade you a missile for an iPod, what do you say? No? What's that about a bolt of retaliatory lightning if I interfere? Do NOT make me send Michelle over there to touch you"! If you're not interested in the iPod, how about a reset button? The Sound Of Music DVD? The secret Hillary Clinton phone sex number?
Posted by DaBlade at 7:26 AM