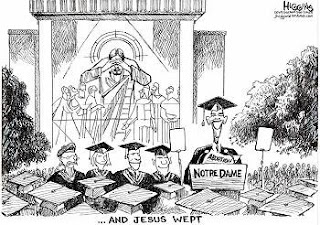 THE PRESIDENT: I know I don't look like the other Presidents who have spoken here, who may have been native born US citizens espousing free market capitalism and who may have loved this country.

I aaaaam thrilled to be here - in South Bend Indiana, on the campus of Notre Dame, home of the Fighting Irish. Indiana is my favorite of all the 57 states. Not really, but I can't help pandering to the typical white people like my grandmother. Thank you to everyone responsible for painting that huge mural of me with outstretched arms painted on the side of that library building. Looks just like me. Since it faces the football stadium, let's call it "Touchdown Obama", even though I play football like one of them retarded Special Olympians.
[nervous laughter]

I know thaaaaat... there was some controversy over my invitation to be here today, aaaand... I want to thank Father Pfleger [Pause - checking Teleprompter] errr... I mean Father Jenkins - for not buckling to the demands of the bitter clingers and those bigoted one-issue Christians who take umbrage with my anti-life positions. Who's to say that life begins at live birth? That is a question above my pay grade. Surely there are issues we can all agree on, like my socialist takeover of the economy. Why quibble over the small pile of 50-plus million baby carcasses killed by abortions and stacked like so much cord wood while there is still some wealth to spread around? Father Jenkins, your 25 second hand DVDs are on the way.
[applause]

My being here proves that Notre Dame is not a Christian nation... [Pause - checking Teleprompter] errr... What I mean to say is, after I won the Catholic vote in the election by a tally of 54% to 45%, I think it's fair to say that American Catholics are not comprised of just a bunch of those Christians anymore. You US Catholics are no less likely than others to find abortion morally acceptable, and 63% of you agree with me in support of embryonic stem cell research, despite the fact that it involves the destruction of human life while curing nothing. Welcome to the unholy altar of the left, where we have a big McDonald's type sign that proudly states, "50 million atrocities in the name of Roe V. Wade served".
[applause]

I was reading an online petition against my visit here (notredamescandal.com)and the form letter there accuses Father Jenkins and Notre Dame of choosing prestige over principles, popularity over morality. Damn straight! Congratulations class of 2009 for rejecting principles and morality as the failed theories of the last eight years.
[applause]

I look out at you new graduates today and I see young, smiling faces of individuals ready to start the next phase of life hoping to "make a difference" in this world. "Hope" and "Change". [students begin to chant: "Yes we can", "Yes we can","Yes we can"]

As I look upon your adoring and worshipping faces, I am reminded of the joyously blank and vacant stares I always get from my followers, especially those in the MSM. At least you kids have an excuse for your ignorance, having lived the last four years isolated in the bubble of this beautiful campus with your noses in books, babes, and video games. It won't be long before the realities of my policies hit, and you will quickly lose that idealism. When you join the swelling ranks of the unemployed, you will be competing for a limited number of jobs with older and more experienced workers who were victimized by the democrat led collapse of the housing and financial markets. Don't worry, for less than one dollar a month, you too can afford housing in a Kenyan shanty, just like my half-brother!

Wait! What did I just say? Uhhhh... Did some computer whiz kid break into my teleprompter? I meant to say thaaaat... Wait. But but but... hold on, hold on a second. Uhhh uh uh While there are still substantial downdrafts in our economy, hold on... there is a substantial anecdotal flow - and other rhetorical flourish, uh uh uh thaaaat the economy is getting a little bit better.
[students begin to chant:"Stuttering Stanley!" "Stuttering Stanley!"]

Alright, come on. Don't make me put my hand on your shoulder while staring you in the eye. I came down here to visit. See this is what happens. I can't end up visiting with you guys and shaking hands if I'm going to get grilled every time I come down here.

And so, there is only one thing left to say: Go Irish! (Applause.) Congratulations, and in the words of my spiritual mentor Reverend Jeremiah Wright, may God D### America! (Applause.)
Posted by DaBlade at 9:35 AM