Fad Farts Them Two (and other Matthew Stafford anagrams) 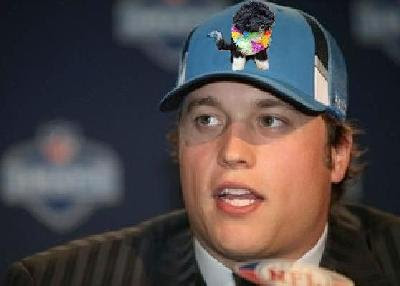 I know I'm old enough to know better and shouldn't care, having been burned as a Detroit Lions fan many times over, but why would an 0-16 team with the worst defense in the history of the league spend it's first two 1st round picks for a quarterback and a tight end? Nothing against Matthew "Georgia Peach" Stafford, I'm sure he is a fine young jazz pianist man who will make us all forget about Joey "Blue Skies" Harrington.

To his credit, Stafford is saying all the right things. Of course, for a guaranteed $41.7 million, I could be convinced to say the right things too. Heck, for that kind of money, gimmee a Tiny Tim wig and a ukulele and I'd stand on the street corner and give my best rendition of "Tiptoe Through The Tulips". Poor stafford is too young and separated from this fiasco of a franchise to even know what he's in for. He may have had a future with a different franchise.