My friend Mumbles sent me this link...
Health Reform Tells the Unborn: Sorry, No Room in the Inn.

...That our government is hell-bent (pun intended) on passing this “health care” reform by their self-imposed Christmas deadline screams loudly of their determination to turn a deaf ear to the people, cover their eyes to the lunacy of their own legislative actions, and steamroll ahead without caring in the least who they run over. They are public non-servants without integrity or honor. And they bow and pay considerable homage to our non-Leader. They want to hand him this bill as a Christmas gift… how heartrendingly ironic.

The Magi traveled far to bring their most precious gifts to the Newborn King, to bow before Him in worship and give glory to God. This week, our nation just might bow to our phony king and give him not our precious gifts of love, but the blood of our children and the broken spirits of their mothers.

Mumbles and I got hungry and went looking for an *unintellible* burger.


We never did find the legendary Cafo my shina in da bullboburgers, so we settled for a schmeezeburger and a prize.

During lunch, Mumbles shared a slice of his personal philosophy with me. If I understood him correctly, he said this:

"To compel a man to furnish contributions of money for the propagation of opinions which he disbelieves and abhors, is sinful and tyrannical."

I told him that quote sounded familiar and asked if he had heard that from my friend RightKlik. He said no, and near as I could figure, he heard this from some fella named Jeffas Thomerson. 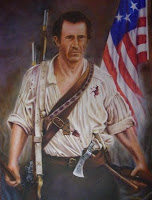 Apparently, there is a line that can be crossed by a competing political party in power, and that's where the trigger option comes in, at least according to Mumbles. A tyrannical and arrogant government that jumps over this line will be met with massive crowds in the streets and civil unrest. Clashes with security police could escalate, and Mumbles says this could be the beginnings of an all out revolution.

Mumbles and I like to discuss the inner machinations of the Iranian state over lunch.

Why? What did you think we were talking about? Potcha delka inda bartle doo?
Posted by DaBlade at 7:45 AM