Did Santa Lose His Workshop to Foreclosure?

I may have been born last night, after having fallen off a turnip truck, but I'm smelling something like ozone in Denmark. First, I'm not a big believer in coincidences. Secondly, I have trouble believing in the "occurrence of events that happen at the same time by accident but seem to have some connection." (thanks merriam)

So when I see that Obama met Santa Claus as a preclude to this week's "holiday tree" lighting ceremony on Thursday, and the very next day Santa turns to a life of crime, I have questions! 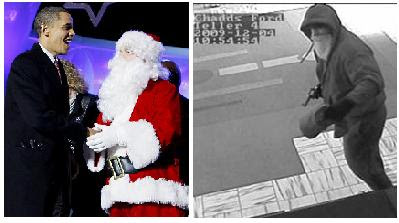 It is well documented that Obama has an aversion to patriotic lapel pins and was always uncomfortable when our National Anthem is played ("What do I do with my hands?...")

On the other side of the coin (a coin that no longer engraved with "In God we Trust"), Mister Obama has taken every occasion to show his subservience to every Islamic monarch, Japanese emperor, Communist dictator, and third world thug by either enthusiastically bowing to them in surrender, or joining their book club.

Now we enter the Christmas season, and mister Obama reminds us at every occasion that "we are no longer a Christian nation."

Mayor Wiseman says "Obama's speech on Tuesday night on the war in Afghanistan was deliberately timed to block the Christian message of the 'Peanuts' television Christmas special."

If that's not outrageous enough for you, how about the fact that Obama refused to bow to Santa. Not. Once. Is that because Santa is an iconic figure who represents a Christian holiday?

As I've said, I have questions. As far as I know, Bad Santa is armed and dangerous and is still at large.
Posted by DaBlade at 8:41 AM