Today's ASSignment: Who Shall Live?

I don't know why anything can still surprise me, especially coming out of a public school, but Wow! As George Costanza says, "I'm speechless! I am without speech!" 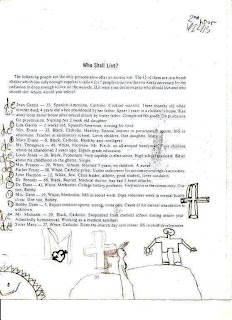 BREAKING NEWS! I know it is small, but get a magnifying glass & you will NOT believe this assignment given to 11 year olds at a Missouri GOV'T chool! They are asked to decide who to let DIE after a Nuclear bomb situation & the fallout shelter only has enough food for some. The kids were told NOT to bring this home & show their parents. This is the 1st step of brainwashing these kids for bAMACARE & having to decide whose lives are more valuable than others...not to mention killing Grandma! When I have more details & ready to take it to the press I will let you know. These kids are only ELEVEN! — Bamboo Bob


The following people are the only persons alive after an atomic war. The 15 of them are in a bomb shelter which has only enough supplies to allow for 7 people to survive the two weeks necessary for the radiation to drop enough to live on the outside.  If it were your decision as to who should live and who should die, whom would you select?